Jenny Craig has been surveying butterflies and their habitat at Bingham Linear Park since about 2008. She regularly contributed annual survey reports to the old printed South Notts Local Group Newsletters, beginning with one for the Spring 2010 edition, and has continued to contribute to our new website. Over this period her survey results and analyses have built up into a excellent profile of how butterflies at this site have responded to fluctuations in weather and changes in habitat. In this article we present all Jenny’s survey reports collected from the Newsletters.

Jenny is currently Secretary of the Friends of Bingham Linear Park. She regularly leads butterfly walks at the Park during the summer. You will be most welcome to join one of these – details are usually both in this website’s diary and on the Friends’ website.

The seventh year of my butterfly transect along Bingham Linear Park. The notable features of this year were: 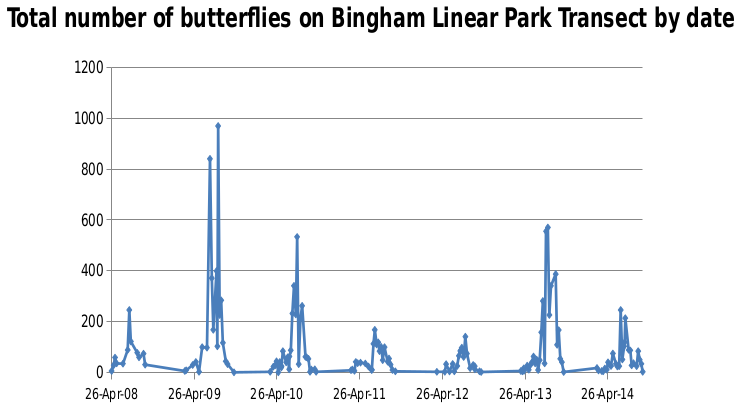 The number of species seen was not as high as last year (23 as opposed to 26) but still higher than previous years: 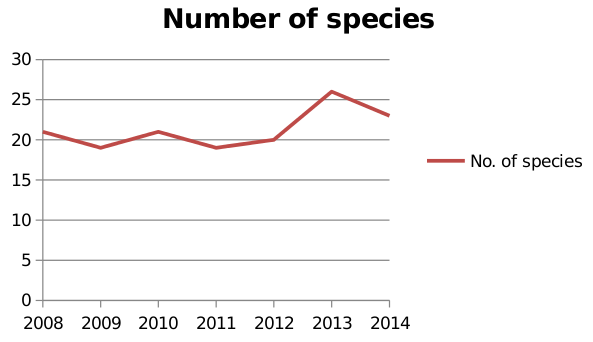 The total numbers of butterflies compared with previous years:

Butterflies on Bingham Linear Park in 2013 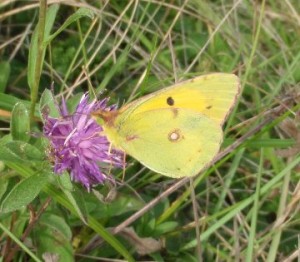 A better year for butterflies than the last couple of years! Highlights included the appearance of a few individuals of species rarely seen in the area, such as marbled white and clouded yellow (pictured); the best year yet of the last six years for the grizzled skipper; and good numbers of whites and browns in the summer.

It is interesting to contrast the trends in numbers by species. There are some species like the speckled wood, which seems to appear in about the same numbers every year: 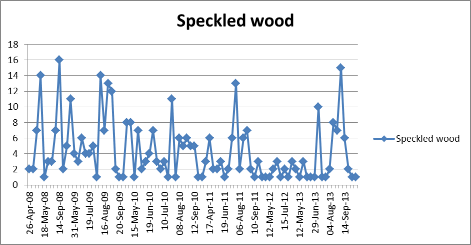 Other species such as the whites (large white, small white, green-veined white) and browns (meadow brown, gatekeeper, ringlet) show similar patterns over the last 6 years with some very distinct peak years like 2009 and 2013: 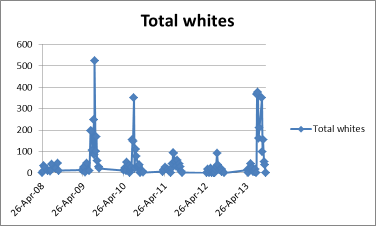 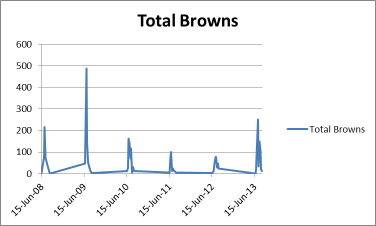 Then there are species such as the painted lady and small tortoiseshell that are not so easy to predict, and although they did well in 2009 they did not repeat the peak this year.
The butterfly numbers do reflect the main features of the weather in 2013: 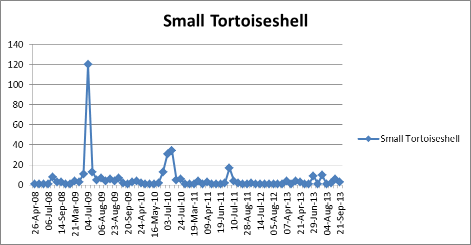 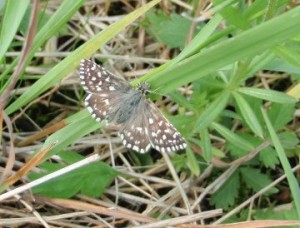 Notably there were no butterflies until April due to the unusually cold spring. As the weather was reasonable for most of the summer so were the butterfly numbers. The sunny days in May helped us to see the grizzled skipper (picture) on several occasions, more than in the previous five years. The Linear Park is being actively managed to encourage this rare species so this was good to see.

Finally the number of species was the best of the last five years topping at 16 in one transect. This was partly due to the cold spring causing spring and summer species to overlap more than usual and due to the appearance of the rarities (clouded yellow and marbled white): 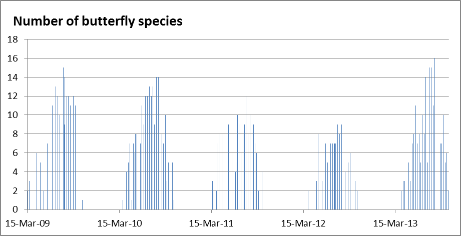 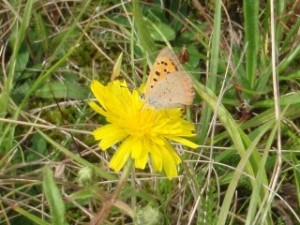 This is the fifth year of my survey of butterflies on Bingham Linear Park. 2012 was not a good year for butterflies – numbers counted were down on 2011, and that year was worse than the previous two. The number of species was about the same as previous years but some species were in very low numbers: I only saw one grizzled skipper (although we did find some eggs) and one painted lady. Red admirals and ringlet had their best year yet, whereas the numbers of small tortoiseshell, common blue, gatekeeper, speckled wood and whites were all the lowest of the 5 years. 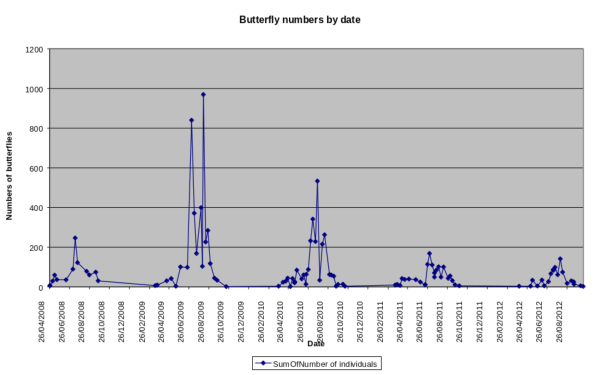 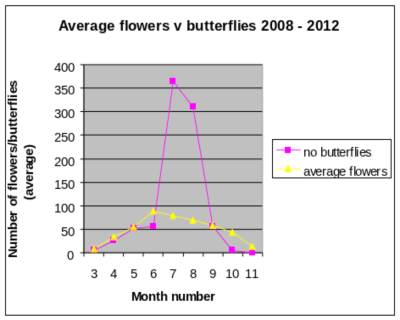 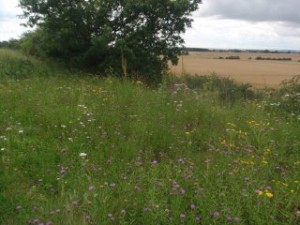 As far as the plants are concerned the wet conditions were quite good for flowering plants and fungi. In contrast to the previous two years, the number of species in flower in August was similar to July and June. I think this is because the wet conditions in June and July enabled plants to continue to flower later as they were not subject to drought. 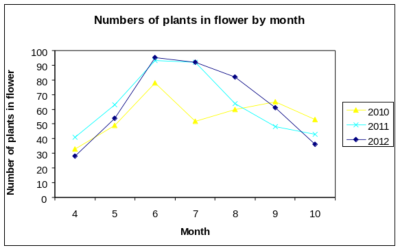 Numbers of plants in flower by month

This is the fourth year that I have been recording butterflies on Bingham Linear Park. So how does this year compare with the previous years? Overall it was a relatively poor year because the total number of species was down (12 compared with 15 in previous years) and the maximum total number of individuals on any one day was only 168 (see graph for comparison). I saw no painted ladies (Cynthia cardui) or small coppers (Lycaena phiaeas) at all this year. 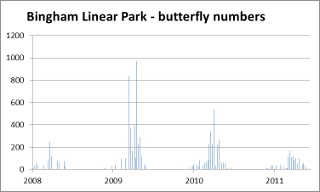 However for our rarest species, the grizzled skipper (Pyrgus malvae) this was the best year. I saw a total of five in a variety of locations, compared with two in 2008, 2010 and none in 2009. This is fortuitous as this year a grant has been awarded to East Midlands Butterfly Conservation and Notts County Council to help improve habitats for this rare butterfly species. It is at the northern edge of its range in this county. Old railway lines are a good habitat for this species which I have seen most often in areas of short grass, often feeding on mouse ear hawkweed (Pilosella officinarum) or, as shown here, on bramble flowers (Rubus sp). We are encouraging the growth of creeping cinquefoil (Potentilla reptans) which is one of the larval food plants. It can grow well on the old track bed where the competition from grasses is less. 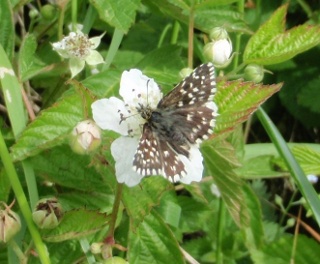 Other species which bucked the trend this year were orange tips (Anthocharis cardamines) which were quite a common sight in April, and red admirals (Vanessa atalanta) which were seen from April until November.

Small white (Artogeia rapae), brimstone (Gonepteryx rhamni) and speckled wood (Pararge aegeria) were seen in about similar numbers to previous years but for all other species numbers were significantly down.

This is the third year I have recorded butterflies along Bingham Linear Park, so how did this year compare with the previous two? Generally 2010 was not as good in terms of numbers of individuals compared with 2009 but better then 2008 (see graph below). 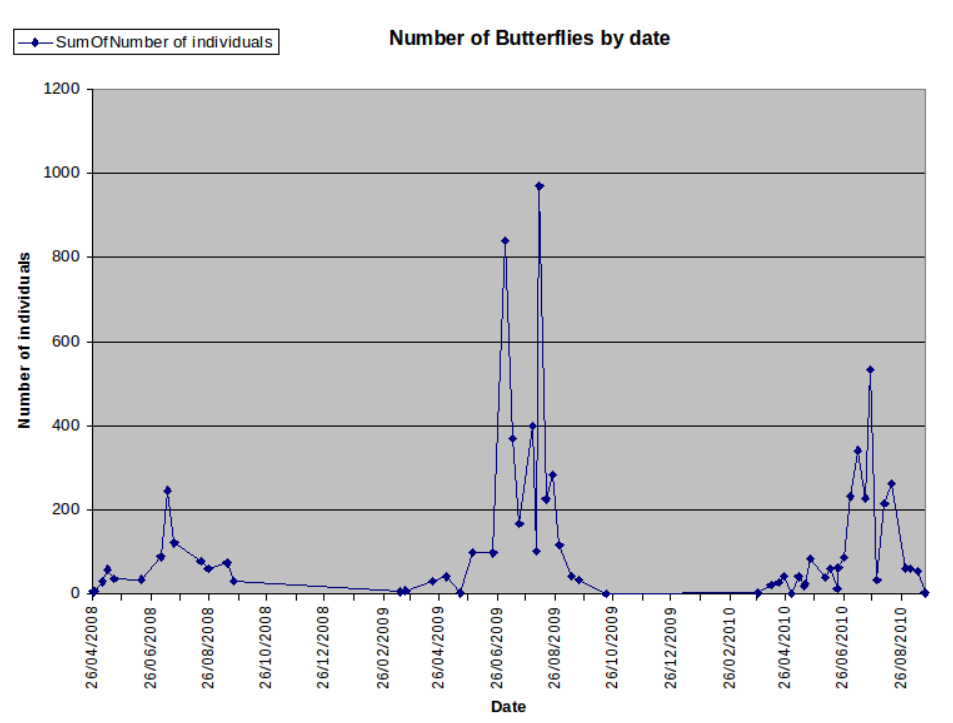 2010 was good for some species such as brimstone and brown argus. The number of common blue was better than 2008, slightly less than 2009 but otherwise a good year.

For several species such as gatekeeper, speckled wood, small copper, red admiral, small heath and small white the numbers were pretty similar this year as in 2009 and 2008. Green-veined white had a longer season of good numbers in 2009 than 2010 but otherwise similar numbers to previous years were seen on any one day.

There were a few differences. Comma, for example, were present in similar numbers in 2009 and 2010, but there was a peak in September 2008 when we found blackberry bushes covered in commas. I did not see any orange tip in 2009 but I saw similar numbers in spring of 2008 and 2010.

The number of meadow brown this year was down on both previous years.

The big difference was that there was no peak in the numbers of peacock, painted lady (none seen this year at all), large white, ringlet and small tortoiseshell as was seen last year. It is thought that many of these were blown in on the jet stream last year from the continent, this did not happen this year.

However I did see a clouded yellow which I had never seen before. I was please to see one or two grizzled skipper (not seen in 2009), this species is rare but generally had good year on other sites too.

Like last year the best day for numbers was a warm, calm day towards end of July and again fewer individuals were counted on windier days. 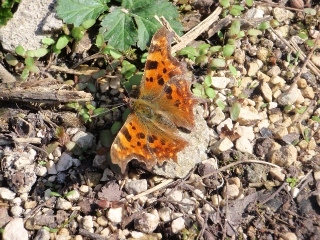 This spring I noticed individual butterflies were sitting on open patches of soil with their wings open, perpendicular to the sun. Using an infra-red remote sensing thermometer I was able to read the temperature of a butterfly and the ground it was sitting on. This enabled me to compare with the air temperature to see how effective they were at using this as a method of heating themselves up. So on a day in April when the air temperature was 13 Celsius the places where butterflies were landing on were up to 30 C, and some individuals were as warm as 34 C. So a combination of a warm microclimate and making use of direct radiation enabled the butterflies to achieve a good temperature on a cool day. I will try to make some more recordings of this behaviour next spring.

My thanks to Bill Bacon for help and encouragement in making these observations. 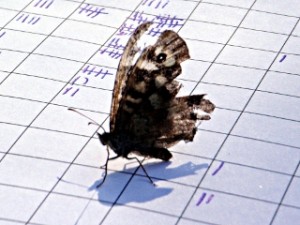 For the past couple of years I have been taking regular walks along the Bingham Linear Park, counting the number of each butterfly species I saw and noting where I saw them. This simple survey method has enabled me to find out all sorts of things that more casual observations may have missed. On the internet I found a website that had weather readings taken every ten minutes from a weather station a couple of miles away in the Belvoir valley (Plungar weather station, Vale of Belvoir). This enabled me to correlate my butterfly observations with the weather prevailing at the time of the survey. Now I am able to back up the intuitive feelings about the factors affecting butterfly numbers with real data.

So what have I found out? The results show butterflies like the warmth and do not like wind. On windy days the butterflies are found in sheltered areas where a patch of rough meadow is sheltered from the prevailing wind by scrub or in the cuttings. 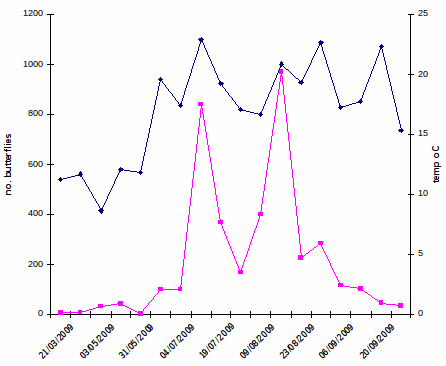 Variation in butterfly numbers with temperature 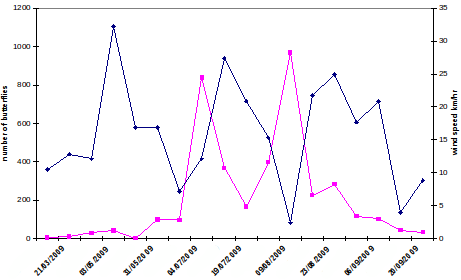 Variation in butterfly numbers with wind-speed

Butterflies are more numerous in the summer, but  there are some species that are present throughout the warmer months in about the same numbers (such as speckled wood, comma and brimstone). While there are some species that are present in large numbers for a few weeks only (meadow brown, gatekeeper, ringlet). On one day in July I counted about 500 of these brown butterflies but by early August there were only 13. 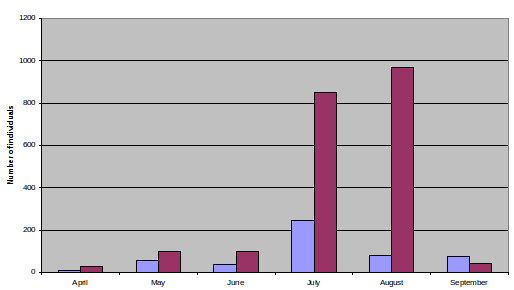 Overall the number of butterflies this year (2009) was much higher than last year, when the most I counted on one day was 247, this year it was 969. 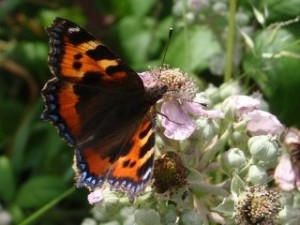 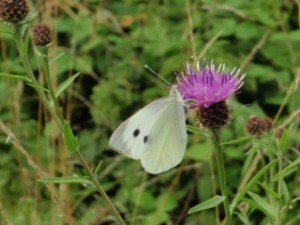 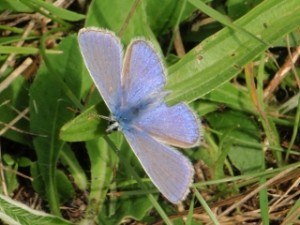 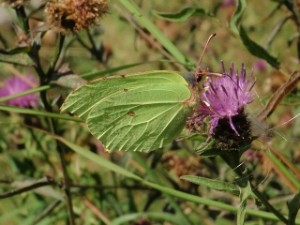 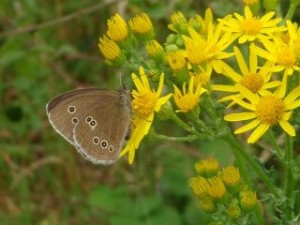 There are some species that have been present in much greater numbers this year such as painted lady (120), small tortoiseshell (120) and large white (320), in the period early July to early August. Other species such as common blue, peacock, small white and green-veined white were also present in about ten times the numbers they were last year.

There are some species that are found in particular habitats – speckled woods are strongly associated with areas of shrubs and trees. Some species like the open conditions of the track bed such as common blue and small copper.

These findings may seem obvious but they help us manage the park to help butterflies in the future. For example: it is important to keep areas of herb-rich grassland sheltered from the prevailing wind. So we mow the grassland and remove encroaching scrub from it but keep a shelter belt of hawthorn on exposed sides.

This is just two years worth of data. I look forward to surveying the butterflies again next year to see what further patterns in numbers and behaviours can be observed.

Thanks to the people who accompanied me on these walks and helped me spot and count the butterflies.