We are delighted to announce that co-operation between the Local Group and Notts Wildlife Trust has resulted in a £28k project funded by a combination of Heritage Lottery, Awards for All and Rushcliffe Borough Council. 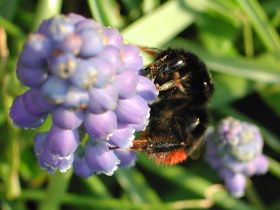 Insect pollinators are vital for fruit crops – from apples to blackberries – commercial and in the wild – and for our garden and wild flowers to set seed. Some fifteen hundred species of insects act as pollinators in the British Isles, including various bees, wasps, hoverflies, butterflies, moths and beetles. Most have suffered serious declines in numbers since the second world war; for instance, it is estimated that at least twenty of our native bee species have become extinct during this period! These declines are likely to be linked to changes in our landscape and patterns of land use since the 1940s. In early November 2014 the Department for Environment, Food & Rural Affairs launched its National Pollinator Strategy “to protect pollinating insects which support our food production and the diversity of our environment” – planned actions to reverse the decline of the last 70 years. If you have a garden or allotment you can help:

See the Bees’ Needs website for more on this topic.