In his Weather Eye column in The Times on Monday 23rd May, Paul Simons reflected on orchids’ role as a good indicator of Britain’s warming climate.  In recent years, several foreign orchids have begun to appear here. Quite common in the Mediterranean, the Tongue Orchid Serapias lingua has begun to establish itself in England, having been found in Essex a few years ago. Last June, the Small-flowered Tongue Orchid Serapias parviflora was discovered on the roof garden of a London tower block and, subsequently, at sites in Suffolk and Cornwall. A third foreign orchid to arrive is Himantoglossum robertianum, a close cousin of the resident Lizard Orchid, discovered in Oxfordshire.

It is thought that orchid seeds are so light they are easily blown across the Channel – so have they been coming here unknown for many years? – and new varieties are only now growing and flowering as a consequence of the changing, warmer, climate.

In Rushcliffe we have a relatively small number of resident orchid species compared to Southern England.  One of them, the Bee Orchid Ophrys apifera, found at various sites including Wilford Claypits, Skylarks and Rushcliffe Country Park is experiencing something of a boom. In the 1960s it was largely confined to grassland in southern and southeastern England, but in recent years has spread northwards, appearing in different habitats including disturbed ground, reaching Scotland in 2003.  Interestingly, although an insect mimic whose flower imitates the shape, markings and furry texture of a bee, it is largely self-pollinating. 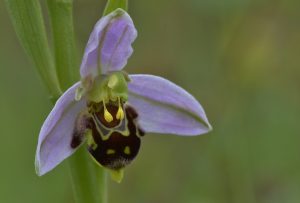 Sadly, the good news of the spread of Bee Orchids may not be entirely representative of the situation as a whole: in her Nature Notes in the next day’s Times, Melissa Harrison writing about Greater Butterfly orchids noted that “like most of the 50-odd orchid species in the UK, greater butterfly orchids have declined sharply since the middle of the last century…”