This year has seen a very good number of Cowslips in flower at the site, but also at Wilford Claypits and on Collington Common. In total nearly 4,000 flower spikes have been counted. Also good news is that the number of Green Wing Orchids was up this year and whilst number are drastically down from the flooding a fourfold increase from last year suggests the population is graduly reestablishing itself..

Very soon (if not already) the Southern Marsh Orchids will be coming into bloom and I am hoping to see the Bugle again this year (a few flowered last year for the first time since the flood).

But where are all the butterflies ?

This is our annual fund raiser and last year helped us contribute £1,500 to help support the work of Notts Wildlife Trust..Please come along this year and support us.

We will be selling

and we will be selling out General Knowledge Quiz sheet

For a summer stroll amongst examples of Rushcliffes best flora why not come to Wilwell Nature Reserve Open Day, which is on Saturday 11th June for a range of summer wildflowers including Southern Marsh Orchids, Knapweed, Ladies Bedstraw and many others uncommon to the area. Many of the flowers will be labeled and information sheets posted about the wildlife, the reserve and the, work of Nottinghamshire Wildlife Trust and we will also have a nature table set up. In the past couple of years we have been doing a lot of work to control the scrub encroachment on the wildflower meadows and have opened up the railway embankment and marsh areas. Wilwell is on the B680 running between Ruddington and Wilford Village – coming from Ruddington it is on the left just before the ring road bridge and the entrance will be signed. It is one of for Notts Wildlife Trust reserves in the area, so look out for events at Bunny Wood, Skylarks and Wilford Claypits. The open day is from 10am till 4pm, car parking available. For more info about Wilwell see our web site www.southnottswildlife.com.uk

This year Nottinghamshire Wildlife Trust asked for nominations in it`s Wildlife on Your Doorstep Awards and got a total of twelve eneries from Rushcliffe, more than any other area of the County. This illustrates the vibrancy of nature conservation in Rushcliffe as these nominations represent individuals and groups working at ten different local sites. Notts Wildlife Trust are delighted to announce that the winners in Rushcliffe are as follows

Individual Category – Harry Eustace (Friends of Sharphill Wood) who joined the group’s work parties as part of his Bronze Duke of Edinburgh Award, and has become a work party regular after getting his Bronze and introduced his younger brother to the work party as well. Harry is a focused and hard worker, carrying out dead hedging, maintaining the paths, coppicing and felling small trees, as well as competent in the planting and aftercare of small hedging whips.

Group Category – Holme Pierrepont Country Park Group for their work over the last year to introduce more wildlife friendly features and habitats into the park including clearing Hymalyan Balsam, creating a bird hide, making and installing bird boxes, creating a spring wildflower garden and opening up a stagnant pond.

Schools Category – Ash Lea Special School for the hard work put into creating maintaining their wildlife garden over the years The school is also supporting the Trusts work at Skylarks coming along to to carry out conservation tasks as well as survey work. 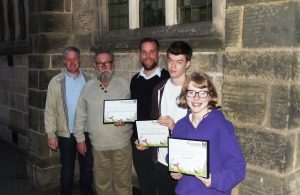